Anything related to any type of design.

Hey now, another blog post! If I keep this up…well, I dunno, something bad might happen. Also OMG GEORGE W. BUSH IS GONE DEAR GOD THANK YOU. Truthfully I didn’t care who got in office as GEEDUB got out. I had a feeling that Obama was going to win the thing anyways, but it doesn’t matter because I didn’t have a fucking free minute all day long to get the chance to go and vote T_T. Either way, I didn’t like Obama or McCain at all…though I think that Obama is the lesser evil out of the two. Hooray for that I suppose. I dearly hope that he doesn’t fuck up the country anymore than it already is. 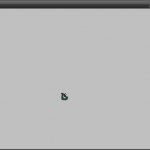 Anyways onto the meat of this post. I’ve been working diligently on my Game Design assignment Blast TV with my partner. I sent him the player sprites the other day and he sent me back a working demo of the guy running around…I must say I impressed myself with the spriting work…though I was more impressed with my partner’s programming. CHECK IT OUT, YO; you can’t really to much, but I think it’s really neat. Use WASD to move/strafe and the mouse to aim. Smash TV didn’t have the advantage of using a mouse to aim the player, but in this game you will! I probably walked around making shooting noises and pretending to shoot bad guys for almost 15 minutes before I got back to work :P. Speaking of work, I finished a large chunk of the sprites today. 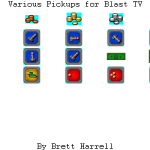 The first thing I focused on were the pick-up sprites.These range from power-ups to weapons to prizes (to increase your score). Not all of it is original work though; I made the base for the pick-up icons as well as the money stack, present, and the spreadgun pickup pellets. Hopefully they’ll look good in-game. I modeled the base graphic off of the Smash TV sprite version of pickups, so we’ll see. I even got a little fancy and made animations for the missile and spreadgun pickups; Smash TV didn’t have that now did it! I also focused on the projectiles for the 3-4 weapons in the game (the 4th is questionable at this point). 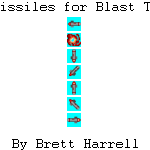 There will be the normal gun which shoots a slender bullet and has a decent rate of fire, a missile launcher which is a larger projectile and it shoots through baddies, and a spreadgun which shoots 3 rays of large round pellets in a V shaped pattern. We aren’t going to go through and replicate every single weapon from Smash TV though; some of the weapons are kinda redundant and it would just take more time to program them in and make/find graphics and sounds for them. The questionable 4th weapon is more of a powerup than anything. There’s a powerup in Smash TV that gives the player a little floating/orbiting ‘add-on gun’ which gives you twice the firepower and coverage. I’m kind of hoping my partner will be able to do the coding for it because I think it’s a really cool powerup and it will make the game that much cooler to play.

I even went ahead and made the sprites for it (erm…not made but found, heh). He hasn’t gotten back to me on it yet, so fingers crossed. Anyways, like before, all of this work here is free for anyone to use! Just please credit me somewhere and I’ll be happy

All I have left to do is make/find some of the generic bad guys (the ones that horde into the game all at once…and you just kinda slaughter them like you would a colony of ants with ant killer). I also need to make/find sprites for one or two higher up bad guys (preferably something like a robot or a small tank or something)…aaaand then make/find one or two bosses. This is easier said then done; top-down sprites are really hard to come by

I think I may have found a decent boss or medium-grade bad guy, but I’ll have t color him in. My partner found some top-down Contra sprites that I’m going to use for the generic baddies and he also found some possible medium-grade bad guys. I just need to make the diagonal frames for both (and maybe an attack frame) and that’ll be done and ready to go. Lastly I have to find sounds. Thankfully I have access to a pretty large library of sounds; it’s called /idgames. So between the rest of the graphics and sounds I may have to make some misc. stuff…but other than that, I’ll be good to go. If anyone has any recommendations for good top-down sprites, please send me a link! I can use anything; since this is a class and nothing will be released commercially or otherwise, we can use ANYTHING we want, content wise. My partner and I would greatly appreciate the help