Anything to do with games in the broadest sense. 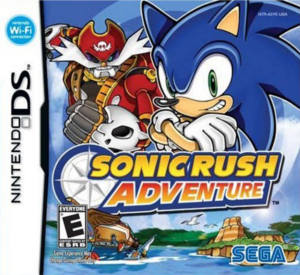 I’ve been working pretty diligently on my new, technically unannounced Doom project “Supplice” for the past few days, trying to put the whole Project Vega cancellation business behind me. The project has been progressing very well and should be ready for map production relatively soon. I’m really excited to start working on it since it’s been a while since I’ve done any serious mapping. I’ve been meaning to make an official public announcement that will explain the project in further detail as well as list off the current goals, since the majority of them have been ironed out and finalized. But instead of doing that, I’m going to do one of my mundane, boring “the latest game I’m playing” reviews

Oh who am I kidding? No one reads these things…oh well!

It’s no surprise that I’m generally behind the crowd when it comes to game releases and news. I don’t really consider that a bad thing though. My tardiness allows me to scope out some of the games I keep my eyes on to see if they are worth purchasing, which is usually a good thing. Half the time when I take the plunge and drop 40-60 bucks on a game as soon as it comes out, I’m disappointed in said game. And then a month later the game drops in price 10 bucks or more

. So when I first saw that Sega was making a sequel to it’s DS Sonic Rush game, I was half excited and half apprehensive that the game wouldn’t be that good. The original Sonic Rush was actually an excellent Sonic game in a recent flood of very poor Sonic-related releases on other platforms over the past few years. It was the first game I purchased for my DS, and it was a good purchase indeed. Unlike the mish-mash of half-baked gameplay concepts and poor execution that littered almost every next-gen Sonic release beyond Sonic Adventure 2, Sonic Rush was actually loyal to the roots of the original games. It’s fast-paced, 2D, and focuses on navigating around the levels with speed very much in mind. There are some new things here and there that are new for gameplay, but they don’t detract from the game. Such things include a storyline that’s conveyed in a similar fashion as the Adventure games, a new character that’s part of the story but plays almost exactly like Sonic, and duel screen play that makes the levels feel much more expansive than if they were delegated to a single screen. Quite an excellent game. If you own a DS and your a fan of the old school Sonic games, I definitely recommend gabbing Sonic Rush. 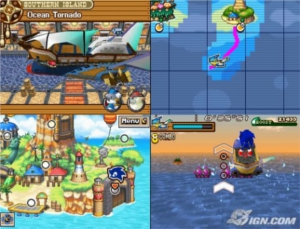 The sequel, entitled Sonic Rush Adventure, is a direct sequel to the first game, story wise. It was released in 2007, so it’s been pretty big gap from when the game was announced to when I actually bought the game. The gameplay mechanics from the first game are all preserved here. However, there are a number of additions and changes within the rest of the game. The story has us starting off with Sonic and Tails getting sucked into a vortex while in search of some energy signal. They awaken to find that they are on an island. From this point on, the story is driven by our hero’s attempts to find a way back home. There are a number of new characters introduced into the game, including the main antagonist of the game, Captain Whisker. He basically looks like a robotic version of Dr. Eggman. While the story is nice and all, it’s not really where your attention is going to be attracted. I won’t spoil the rest of the story, but it is fairly interesting…atleast within the confines of a Sonic game. The meat of the game, the actual gameplay, is just as solid as it’s predecessor. Level progression works a little differently though; in order for Sonic to find a way back home, they have to roam around the seas around them for clues and resources. The exploration of the sea around you is part of the gameplay. You start off with a small jetski type of craft to explore a limited area around you. As you find new islands and beat levels, you are rewarded with materials. Tails uses these materials to build new watercraft which have different abilities and ranges. The act of sailing out to new areas in the sea is actually a minigame on it’s own, and each craft is a different sort of minigame. For instance, the jetski is somewhat like a race minigame. You control the jetski with your stylus and you have to maneuver around obstacles and traps all while collecting rings and powerups. Another gameplay element that anyone who’s a fan of Sonic games will be looking for is the Chaos Emerald minigames. And yes, they do exist in Sonic Rush Adventure as well! You have to search the sea to find and then win various races against one of the game’s antagonists to win back some of the mystical jewels. The races are pretty damn tough, but they should be given it’s to obtain one of the emeralds. One other cool aspect to the game is the addition of missions. There are a total of 100 missions, although I have yet to unlock them all. They add a bit more replay-ability to the game and, for me, are a welcome addition. 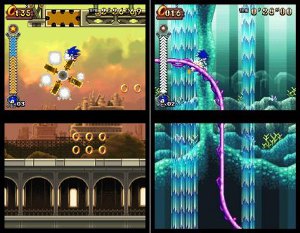 All in all, it’s a very good game. I’d even say better than the prequel. If only I could say that about all sequels

. The core gameplay and level design is, overall, more solid than Sonic Rush. The boss battles are pretty neat and somewhat original, which is really great. The minigames from exploring the seas around you are generally fun and interesting, and they don’t get too repetitive as you’ve got a number of vehicle options to choose from as you progress through the game. I love the art direction in most of the 2D Sonic games, and this one is no exception. The level designs and themes are varied, fun to look at and fun to play in! And they can be quite challenging at times, but never usually to the point of frustration. The addition of the tricks system, tension gauge, and the “Super Boost” from the original Sonic Rush game (actually, I think it goes as far back as Sonic Advance 2 as far as the tricks system is concerned), is probably one of the best new things added to the Sonic franchise since the ability to do the Spin Dash. The Super Boost lets you tear through levels and enemies, and that added layer of speed really tops of the gameplay. As far as negatives go, there really aren’t that many at all. The story isn’t anything to write home about and it doesn’t contribute a whole lot to the game, but it’s not that bad. Plus you can pretty much skip the entire story if you want, which is good. Not so much a negative, but one thing I’m not to partial to is the soundtrack (for both games). I’m a huge fan of the soundtracks for the earlier, original Sonic games. However ever since Sonic Adventure, Sega has took a different direction for the soundtracks for their Sonic titles. For the Sonic Rush and Adventure games, it seems they are catering to the hip-hop crowd somewhat. While I don’t dislike the sound track entirely, it doesn’t come off as what would fit with the Sonic theme. But that’s just some oldschool game player bias…quite unimportant in the musical capacity. This is an A+ DS title in my honest opinion, and I highly recommend it to anyone. You might have a bit of trouble finding a copy without grabbing it off the internet though. The game is no longer in production and I had to hop around 5 or 6 different Game Stop’s until I finally came across, believe it or not, a brand new copy of the game. If your as big of a Sonic fan as I am, especially of the oldschool titles, then I highly recommend you track down a copy.

I’m still very much a huge Sonic the Hedgehog fan despite some of the more lackluster releases in recent years. I mean, I grew up and fell in love with the game! It makes me feel all warm and fuzzy inside to see when a company does something right with their old but popular franchises, and the Sonic Rush series is just that. Nostalgia always grips me in times like this. And wouldn’t ya know it…the timing couldn’t be better! Sega is releasing a collection of the 4 classic Sonic titles for the DS…quite appropriately called the Sonic Classic Collection. It’s supposed to be released sometime in March and I’ll be jumping all over it like white on rice. I lost my Genesis and all of my Sonic games for it years ago, so I have no problem shelling out some money to buy them again for my DS. I’m also looking to grab the Sonic Advance threequel as I missed the latter two games in that series when they were released.

It has come to my attention that Sega just made an announcement about it’s new game, Sonic 4. However, this is not a big 3D Sonic game that Sega has been crapping out over the past few years. In fact, it’s going to be a 2D sidescroller using a very similar gameplay formula that the original Genesis games used. It seems that Sega is following the formula of Capcom and it’s recent release of Megaman 9 in oldschool form. Oh my, I hope this trend continues

. The game is supposed to be a direct sequel to Sonic & Knuckles and that’s something that really gets me excited. Hopefully that’ll just be another indication that the game will be as fun as the original games. Here’s a wikipedia article on the game and it’s background so far. Heh, I couldn’t have timed this blog post any better