So uh, I changed the theme and a few other things related to the site. I liked the previous theme just fine, but I found a better one that I liked better. It has a little more color and the font is smaller…which I like. I also figured out a way to enable comments for the static pages. Looking back I don’t know why I wanted to do that in the first place…but yea, you can comment on the other pages now if you really want to. If things get too stupid I’ll just disable them again :p. I also merged the ‘Contact’ page with the ‘About’ page because having those two seperate pages seemed a little redundant. Also I wanted an ‘Other’ page so that I can post content that doesn’t really pertain directly to Doom/Game projects. Oh, I also thought it would be cool put up an RSS widget for the Wads-In-Progress site. It’ll show the 5 latest entires at WIP, so that’s cool. Let’s see…anything else?

Today I had my Game Design class. The class isn’t all that bad actually though it’s focused more on the game development process and the history of video games than the more technical side of game design. Throughout the semester we pair up into groups of two and make an original game based off what we’ve learned so far. Oh, did I mention that we use GameMaker? Yuck, I know…that’s one thing I don’t really care for in this class. But I digress, we had another original game assignment assigned to us tonight. I paired up with this guy who is a programmer at his job, which is really cool for a number of reasons. The previous game he made was pretty awesome in respect to the programming, so I’m really looking forward to working with him. We decided that we would try to make a Smash TV clone, named Blast TV [heh]. It’s going to play pretty much like the original just with new graphics, sounds, etc. My job tonight was to help search for some sprites, namely a top-down view player sprite with 8 rotations. For some reason they are incredibly hard to come by, so I decided to make my own. I found a pretty good base graphic to work off of, and this is what came out the other end of GIMP: 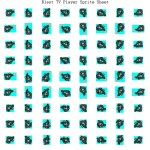 8 degrees of rotation and walking frames (with and without a firing frame). I think they came out pretty good considering that I made them in a few hours. Hopefully he’s not too big though…we didn’t really get around to discussing sprite proportions or anything like that. If anyone wants to use these sprites, just let me know and I’ll upload a .bmp version of the sprite sheet. I’ll also eventually upload two other original games that I made in this class; both use sprites from id games :D. However both are pretty uninspired and sucky…but what do I care, I did it for school.