I had a pretty decent Halloween holiday. The day started off with me getting up late and then helping my mom fix some of this god-awful cabbage stew. From there I went to go and pick up my grandmother and bring her to our house…and then we just kind of didn’t do much of anything but talk. I was going to carve a pumpkin…but it was getting too late. Around 7 pm I we started out to take my littlest sister to go trick or treating. A few days before it was really cold and I was sort of dreading that it would be just as cold on Halloween. But thankfully it had warmed up quite a bit…though towards the end of the night it started to get pretty chilly. Anyways, we get about halfway around the block (not a traditional block, just a big circle that connect back to our street) and we’re getting ready to walk over a hill. We’re right at the top of the hill when some fucking idiot with North Caroline tag flys over the other side of the hill and nearly runs us all over. On Halloween. When there are hundreds of kids out alongside the road. And this guy has got to be over the speedlimit by many times over. Naturally, I was pissed. I grabbed a rock and threw it at the car but he was already gone.

Thankfully we all made it out of Halloween alive and my little sister scored a nice chunk of candy (which I then proceeded to mooch off of :p). When we got back to the house everyone ate that nasty stew, so I made me some tomato soup instead. Everyone left, I went to my room to play some 360 then went to bed…it was a pretty good day. I took some pictures of the pumpkins and other things, but my camera seems to be on the fritz :/. If I can get it cooperating I’ll remember to plaster them here. Though I’ve got pictures from last year…I think. Maybe I’ll just post them instead…or maybe not. 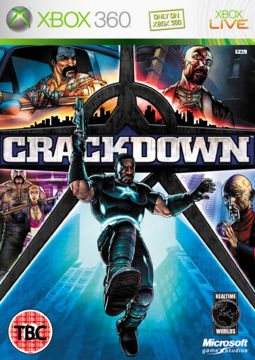 In other news I started a new game of Crackdown this Halloween night since, for some reason, my savegame went corrupt. I actually haven’t touch my 360 in a few months so it was kinda nice to just completely start over. I was contemplating whether or not I should grab the DLC for the new weapons and stuff because I have some points to spare. I might hold off until the new Halo 3 maps are out, just in case. Anyways, I really enjoy this game…it’s sorta like an over-the-top GTA with the roles reversed. By now the game is old-hat to most people since it’s been out for a while. But it really is fun, I can play it and the hours just melt away. I haven’t tried the online COOP yet though. If someone has the game, hit me up sometime and maybe we can play some COOP

And that’s it for now. I gots schoolworks to do