I spent some time today working on ==REDACTED==, which had me doing some stuff on the site. So while I was here, I decided to make some updates around here, mostly in relation to the Design page.

To round out this relatively boring post, have a less boring screenshot! 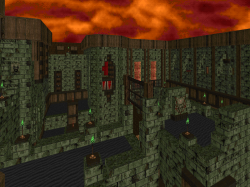 This is one of the last areas I worked on for Faxanadu (Vela Pax MAP04) before getting swamped with other projects. I’ve already posted it at Doomworld and on some of my social outlets, so it has probably already made the rounds to anyone who might have been interested in it. But eh, I needed something in this post to spruce up all the text

. Maybe sometime soon I’ll get a chance to work on Vela Pax again…